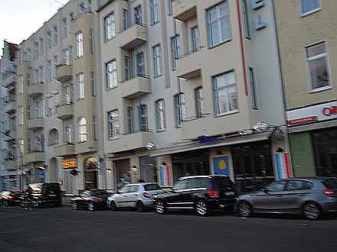 An exit from one of Berlin's many train stations (S-Bahn) takes one along a street of cafes and bars into the heart of one of the central districts of Berlin. Restaurants glow in the gradually darkening evening skies on summer nights and outside tables and chairs are almost always seen arranged in front of them. A single latte in a cafe is easy to find within the space of one shopping block. It's a wealthy area served by hotels and a variety of shops and cafes. Tourist buses are regularly seen - a berlin sightseeing tourist bus frequently makes its way through these streets, and taxis sit at ranks just outside the S-Bahn all day. An international airport: only 30 minutes or so away by bus.

It's easy to get around. It's well organised. It's pleasant. It's a suburb in central Berlin - Charlottenburg, Berlin. A very urban life.

It's also very much apartment life. Because Germany, a country of approximately 82 million people, is highly residential. Berlin is the most densely populated state with around 3,835 inhabitants per square kilometre.

Charlottenburg, for one, is a district of Berlin that is lined with apartments - hundreds of them.

It's also an easy life in some respects. Urbanisation in Germany has not meant clutter and chaos. In Wilmersdorfer Strabe, one of the most well known streets of Charlottenburg, Saturday mornings dawn at a leisurely pace (many shops don't open till 10 am in the area on this day) but residents are out early and soon as the day progresses hundreds of people are in the cafes, shopping, or watching guitar or some other type of musical presentation planned or spontaneously arranged.

Living in central Berlin is very much apartment living - secluded yet open, organised yet free: it's perhaps an element that defines Berlin, the capital of this country that is bordered by nine nations.