Colours and shades of a November weekend in Berlin 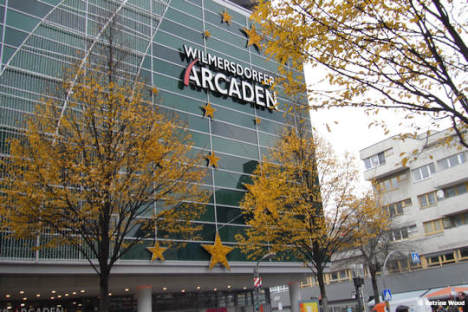 Autumn leaves still on the trees in Wilmersdorfer Strasse in Charlottenburg,

Berlin, saturday, november 18, 2017: It's cold in Berlin on this late week's end, and it's winter, but the leaves blow on the footpaths in a swirling array of what are still autumn colours, gold and rust. Berlin is now in November, post-election 2017.

What has changed? Nothing changes totally and nothing stays exactly the same but for Berlin, perhaps there is at least one notable change, in the last year - a political one. It's now the capital city of a country which has for the first time since the end of the cold war elected as part of it's government a far-right political party: the AfD. The Alternative für Deutschland party now sits among the group of parties that make up the german government, the Bundestag.

For the people in Berlin, it's of course also the festive season and increasingly cold. But the snow that one can see developing on the mountain tops as one approaches Europe from the southern hemisphere is not seen on the grass and streets of Berlin. It's not snowing. Maybe it will later in the months to follow.

On this Friday and Saturday, the shops on Wilmersdorfer straße in Berlin's Charlottenburg district are bustling with pre-festivity shopping. Little christmas trees and santa clauses are displayed along with happy angels, decorations, and cards in a Woolworths store. Christmas displays sit in glass window shop-fronts with reindeer or lights. Outside, however, cafe tables that are usually packed in summer sit somewhat empty in the central areas of the mall's streets. Instead, shoppers and customers often sit at tables just under awnings outside cafes at tables, presumably for the warmth, instead.

The beggars are out also, sitting on ground on the footpaths, outside the shops in this busy central shopping area lined with malls and cafes. Most say nothing. Heads down, looking at the footpath, or looking at the passers-by with expectant eyes. Typically with a begging cup in front of them.

The temperature in Berlin is about 5 degrees C on this saturday with an estimate of approximately 4 degrees tomorrow, contrasting with other cities such as Paris at around 14 or Moscow at about 1 degrees Celsius. It's not snowing and not raining - but it's cold and still.

Inside shops, malls, and hotels it's warm. Advertising for plays or art exhibitions is, as ever, continual, and posters line the billboards regardless of weather. The television in Berlin is german-language on most channels but the BBC english-language channel can be watched as an alternative. A travel show called Arte displays subtitles in german and french and seems to cover a number of areas such as history of rock bands. A cyberworld-addition for the art-starved.

Berlin in winter: the capital of Germany at the end of 2017 - life, here in Charlottenburg at least, continues visibly unchanged, and also unconcerned by the cold of a northern hemisphere winter on this, a cold November weekend.