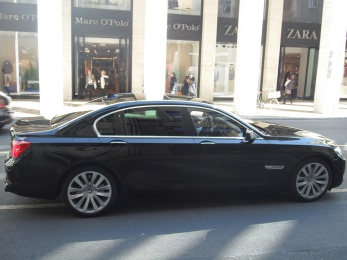 Central Berlin: Friedrichstrasse: Wealthy, business-orientated, touristic - and it has beggars. Not many, but they are there.

Begging is legal in Berlin, one of the 16 lander of the Bundesrepublik Deutschland, and the capital of Germany.

2016, April 29: Outside the train station at Friedrichstrasse near one of the street exits under the train station - just across the road - a beggar sits.  The passersby continue past the beggar, or homeless individual, and cross the road to the shops. No one seems to pay any attention. Overhead is the rail bridge, and in walking down these shopping streets, looking back or accross from here one can see the DB sign of the Deutsch Bahn on the rail bridge. It is under here, on both sides, that beggars often sit, usually only one, sometimes several.

In 2015, for many months, the same: a few homeless or beggars were frequently seen in this part of Friedrichstrasse: on this street, with hundreds of people, shoppers, and businesspeople  stepping around the sitting or sleeping form of a beggar on the footpath, just outside this train station, and then, as on this day in April 2016, continuing accross the street past the many exclusive boutiques and shops.

Police are frequently driving around, and are often seen in or near railway stations -  the small amount of such begging in this part of the suburb that does occur, seems to carry on in such a manner, regardless.

In Friedrichstrasse, a car a few streets from the beggar:  shiny, expensive, sits in front of an exclusive shopping area.

Berlin: a city of some contrast.