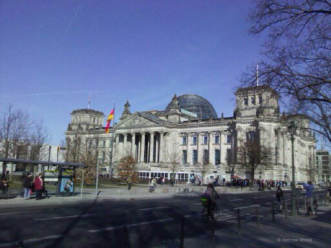 The Reichstag, Berlin, location of the German

The far-right, in the form of the AfD, is now officially established as a political party in the German Bundestag subsequent to winning sufficient numbers at the 2017 German federal elections.

Various concerns have been expressed regarding the potential effects. It is the first time since around the end of WW2, that a far-right political party has had power in the Bundestag.

In late September, the Israeli president, who has expressed some anxiety about an increasing 'neo-fascist trend' around the world, congratulated Angela Merkel on her condemnation of the AfD (Alternative für Deutschland), and said regarding the far-right party:

"These anti-Semitic and racist voices have no place, either in Germany or anywhere else," - Israeli president Reuven Rivlin (source: dpa news.de)

The AfD is regarded as a party of the right or far-right. It is known to be anti-Islam and anti-immigrant in terms of its political focus. In Germany's recent 2017 September 24 election it won nearly 13 percent of the vote which gives it more than 90 parliamentary seats. (It won 94 seats in the Bundestag).

The AfD has been accused of anti-semitism in the past. In addition, according to reports (source: dpa news.de), the far right AfD party has caused concern in the German Jewish community.

including material sourced from dpa-news.de